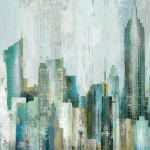 “Whether subconsciously or not your surroundings always have an effect on your work. I believe that being raised in a large city was the biggest influence ion my painting style today” says Edward Selkirk. Edward is an artist born in Southern California and relocated to New York City as a preteen. Before becoming an artist, Edward worked at many other artistic jobs. Some included graphic designs and managing fine art galleries. Today, Edward spends time between Toronto and New York still creating artwork. He hopes to expand his art skills by trying new art like collage work in the future.