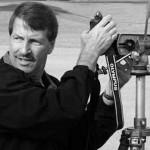 California fine art photographer Gerry Wilson has been capturing art images through the lens for the past thirty five years.

Gerry was born and raised in Racine, Wisconsin. Wilson’s first fascination with photography was aboard the Battleship USS New Jersey. His inspiration was a Life Magazine photographer who was assigned to record a nine month “cruise book” documenting his ship in VietNam. After completing service, he moved to California and received his art degree in photography.

Wilson then became an assistant to a highly established and successful advertising photographer on the West Coast,Tom Kelley, who photographed the famous Marilyn Monroe calendar. While working with Kelly for several years, Wilson learned and developed his lighting skills,balance and composition.

Wilson then moved on to operating his own studio in Hollywood, California for the next twenty years working in the advertising business shooting national ads for magazines, newspapers and outdoor billboards. Gerry’s most inspiring photo shoot was shooting the Oscar recipients at the 2004 Academy Awards back stage.

Aside from his advertising career Gerry has been shooting and capturing beautiful moments in his life starting with his very first 35mm Pentex camera. He has photographed landscapes, sunsets, rustic barns, deserts, flowers and many still life’s set ups in his studio and through this period of time he has created a size-able data base of fine art.

Wilson has now transitioned his work into fine art photography showcasing and selling his work nationally. After capturing an image, he applies a photo filter application that enhances the image resulting in an art print resembling a fine art painting.This treatment is applied to most of his art work which gives Wilson his unique trademark.